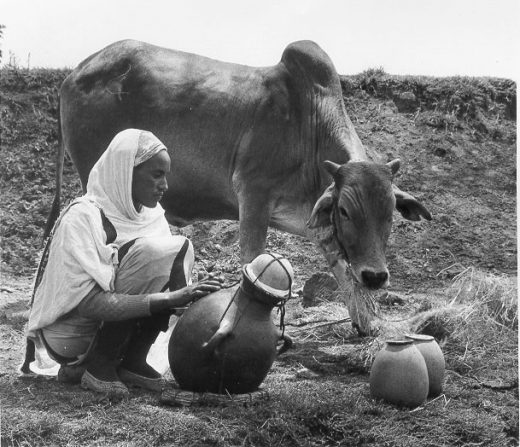 The livestock sector is a major contributor to global food supply of energy, proteins, essential nutrients and it provides livelihoods to millions of people. In many low and middle-income countries (LMICs) livestock production is also the mainstay of the economy. As such, investment in development of the livestock sector can be a strategy to enhance the availability of, and access to, essential nutrients to the millions of people currently suffering deficiencies, and to promote increased participation of the rural poor in a rapidly growing and still labour-intensive livestock industry.

In many LMICs, segments of the population are moving towards increased consumption of animal products because of factors such as higher incomes, population growth and changes in consumer preferences related to urbanization and globalization. While global livestock production is a major user of natural resources and is often linked, justifiably or not, with negative environmental impacts, the factors driving current dietary changes also present opportunities to increase the consumption of nutrient-dense foods among nutritionally vulnerable groups in poor countries. Increased intake of livestock derived foods (LDF) for example, can provide critical nutritional benefits to children, women of reproductive-age and the elderly. LDFs are also considered key to improving nutrition during the first 1,000 days of a child’s life, from conception up to two years.

A recent study on “Contributions of livestock-derived foods to nutrient supply under changing demand in low- and middle-income countries”, by Dolapo Enahoro and colleagues from the International Livestock Research Institute (ILRI) and the London School of Hygiene and Tropical Medicine, shows that demand for livestock-derived foods will grow substantially to year 2050 in eight countries that are currently facing food security and nutrient supply challenges. An assessment of food demand and supply projections for the global agricultural system shows that the demand growth of LDF will persist in Burkina Faso, Ethiopia, India, Kenya, Nicaragua, Tanzania, Uganda and Vietnam under a range of plausible scenarios of global economic growth and climate change. For all eight countries, the analysis shows higher total consumption of LDF in 2050 relative to 2010, reflecting expected growth in income and thus in LDF consumption per person, and expected growth in population.

In addition, household data indicate that ownership of livestock increases LDF intake by children in poor households. These factors suggest strong possibilities for improving the livelihoods and nutrition of the rural poor through livestock sector-based strategies – especially through strategies that increase milk and egg production, since smallholder producers can consume part of what they produce without the need to slaughter or sell a large animal.

However, under current paths of productivity and production, domestic production will not always meet the local demand. The assessment of various scenarios to 2050 suggests that Burkina Faso, Uganda and Tanzania will need to import at least 40% of their supply of livestock-derived protein, revealing an important need for further investments and policy intervention.

Such policy interventions should be broad-based options that will meet multiple objectives for food security, livelihoods, nutrition and sustainability, within the context of rapidly changing demand for livestock products. According to the study, these can take advantage of ongoing large-scale dietary transformations to meet nutritional needs of the world’s poorest populations.

Full paper can be accessed and downloaded here.

This work was carried out at the International Livestock Research Institute (ILRI) and contributes to the CGIAR research programs on Policies, Institutions, and Markets (PIM) and on Livestock (Livestock CRP). Funding was provided by PIM through the Global Futures and Strategic Foresight (GFSF) project led by the International Food Policy Research Institute (IFPRI) (Contract no. 2015X381.ILR), and by the Livestock CRP (3.7). This study made use of projections of the global food and agricultural system obtained from the IMPACT modeling team at IFPRI, with special thanks to Daniel Mason-D′Croz.