Environmental Studies of Japan) to publish an article, "Risk of increased food insecurity under stringent global climate change mitigation policy," in Nature Climate Change.  The article can be found at https://doi.org/10.1038/s41558-018-0230-x.

One of the key findings of the article is that implementation of strict climate mitigation policies can have an even greater effect on food security than climate change itself, at least until mid-century.

There are important additional messages that should not be overshadowed by this finding, however. 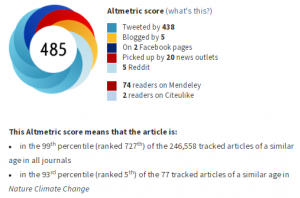 This was a provocative study and it is stimulating a good deal of discussion across news and social media sources (see Altmetric score at this link). Hopefully this active exchange of ideas will help inspire smarter designs for implementation of climate mitigation policies and programs.