As a part of the CCAFS regional scenarios project, three new publications were recently released. All of this work was highly collaborative in nature and done using multiple models from different disciplines to allow for more holistic analysis of complex questions surrounding the potential trade-offs of economic and, in particular, agricultural development. IIASA and IFPRI led much of the modeling work, which also had significant contributions from the University of Kassel, UNEP-WCMC, FAO, and ECOWAS. Global Futures and Strategic Foresight was well-represented in this work, with two current members and one former member contributing as co-authors to all three publications (current: Daniel Mason-D’Croz and Shahnila Islam; former: Amanda Palazzo now at IIASA). The work leading up to these publications was highlighted in the CCAFS 2015 Annual Report.

The first article, Exploring future agricultural development and biodiversity in Uganda, Rwanda and Burundi: a spatially explicit scenario-based assessment, was published on May 21, 2016 in Regional Environmental Change. This article builds on the quantified scenario results of IFPRI’s IMPACT model to project the land use and land cover changes implied by the jointly developed “East African Scenarios.” The article then explores the implications of these changes in land use and the effects of agricultural development on biodiversity and ecosystem services. For more details on this work, please read a recent UNEP-WCMC blog. 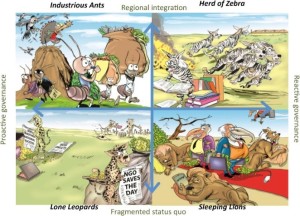 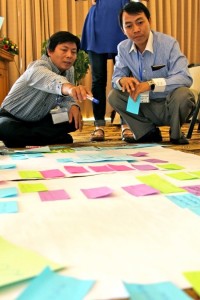 The third publication, The future of food security, environments and livelihoods in Western Africa: Four socio-economic scenarios, published May 9, 2016, is a CCAFS working paper highlighting the results of scenarios developed for the West African region. This working paper presents four regional scenarios developed by stakeholders who identified key factors of change impacting food security, livelihoods, and the environment. The regional scenarios were tied to global scenarios to ensure their consistency with the work done by the IPCC community. The scenario narratives were then quantified using IIASA’s GLOBIOM and IFPRI’s IMPACT models. Similar to the work done in Southeast Asia, these scenarios serve as tools to explore and test policies against plausible futures. This work has been used in policy-making processes such as priority-setting for ECOWAS, the National Plan for the Rural Sector for Burkina Faso (PNSR), and policy processes at the district and national level in Ghana. 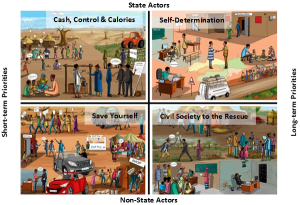 This work was supported by funding from the Bill & Melinda Gates Foundation and the CGIAR Research Programs on Policies, Institutions, and Markets (PIM) and Climate Change, Agriculture and Food Security (CCAFS) to GFSF.