IFPRI, in collaboration with Global Futures and Strategic Foresight (GFSF) team members from CIAT, CIMMYT, CIP, ICRISAT, and IRRI has released a discussion paper titled “Climate Change Adaption in Agriculture: Ex Ante Analysis of Promising and Alternative Crop Technologies using DSSAT and IMPACT”. The paper reports results from Phase 1 of the GFSF program in which the participating centers identified promising technologies to model in linked crop and economic models. Drought and heat tolerant traits were modeled for maize, wheat, rice, potatoes, sorghum, and groundnuts, while a promising pest management strategy was tested on cassava. Specific regions and adoption rates were chosen for each of the promising technologies.

The study found that heat tolerant technologies outperformed drought tolerant ones and that the pure biophysical benefits of the technologies were able to offset the effect of climate change under GFDL climate scenario. When embedded in an economic modeling framework, we see that both climate and technology impacts on yields are dampened. Further, the analysis found that regions that adopted the technologies benefitted through better terms of trade, and showed a decreased vulnerability to global price shocks (link to full report) 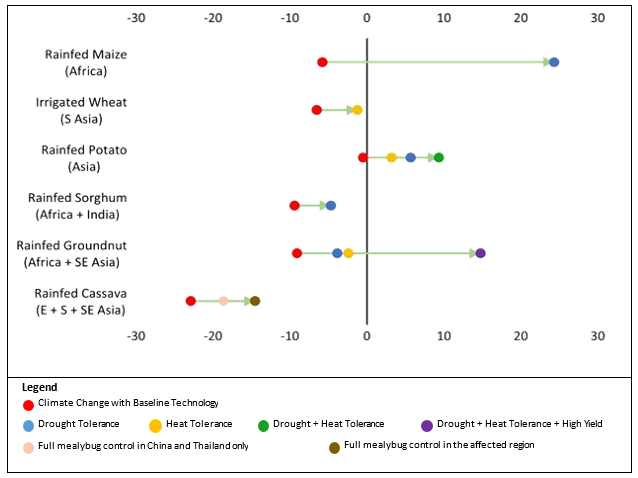 Figure: Effects of Climate Change and Promising Technologies on Biophysical Yields in 2050