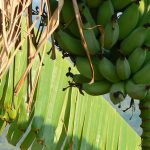 By Bioversity International/RTB — Bananas and plantains (Musa spp.) provide a major source of food and income for over 30 million people in Eastern and Central Africa (ECA). Uganda produces an estimated 10 million tonnes annually valued at about US$550 million. Most ECA bananas are domestically consumed with the highest global per capita consumption of END_OF_DOCUMENT_TOKEN_TO_BE_REPLACED